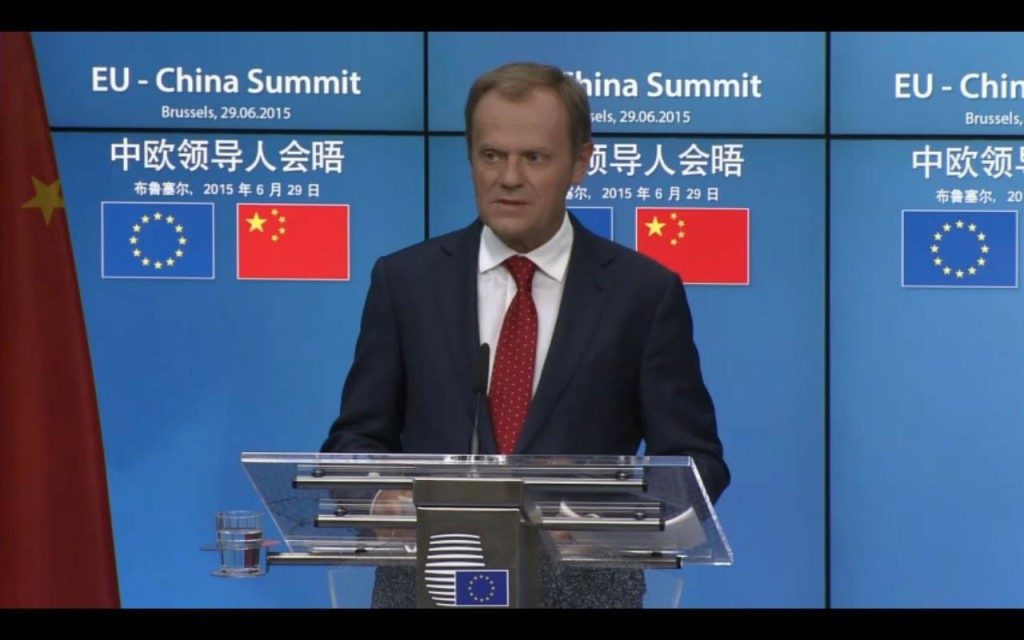 Mr. Donald Tusk, President of the European Union at the pres conference.

Brussels, 30 June 2015: Mr. Donald Tusk, President of the European Council called on China to resume dialogue with Representatives of His Holiness the Dalai Lama at the joint press briefing of the EU-China summit in Brussels on 29 June. Click here to watch.
“I expressed our concerns on freedom of expression and association in China, including the situation of the persons belonging to minorities,” said Mr. Tusk. “I have encouraged China to resume a meaningful dialogue with the Dalai Lama’s representatives.”
He made the statement in the presence of the Chinese Prime Minister Mr. Li Keqiang and the President of the European Commission President Jean-Claude Juncker.
The 17th bilateral summit between the European Union and the People’s Republic of China took place in Brussels on Monday 29 June 2015.
Mr. Tusk also spoke about his concern about the human rights in Tibet. The sweeping crackdowns, arbitrary arrests and detentions as well as torture of demonstrators in prison have lead to the deterioration of the human rights situation in Tibet. 140 Tibetans have self-immolated since February 2009. Such form of political protest is unprecedented in Tibetan history. It is the clearest illustration of the worsening of the situation in Tibet under Chinese occupation.
To coincide with the visit of the Chinese Prime Minister to Brussels, the Tibetan Community in Belgium held a peaceful protest in front of the European External Action Service – EU Foreign Affairs and Security Policy office in Brussels on 29 June. They called for democracy, dialogue and dignity for all the Tibetan people.