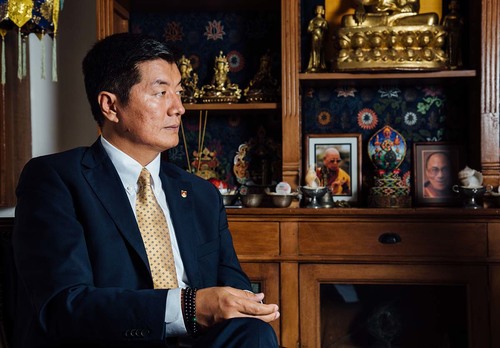 Lobsang Sangay, President of the Central Tibetan Administration in Exile, was in Mexico last month to drum support for CTA’s Middle Way Approach that seeks genuine autonomy for the region within the framework of People’s Republic of China.

In an interview with Reforma, Mexico’s largest selling newspaper, Dr. Sangay affirmed: “We proposed to the PRC a win-win initiative which gives the Tibetan people genuine autonomy, as guaranteed in the Chinese constitution.  We will not pursue independence from the PRC even though our country was an independent nation before China’s illegal occupation of Tibet”

Dr. Lobsang Sangay affirmed that if Mexico and the world in general wants to understand China they are obliged to study the history of Tibet.

Below is the English translation of the interview.

Guadalupe Loaeza: What is the status of the democratic process that the Tibetan community is now undergoing?

Dr Lobsang Sangay: The Tibetan community is currently spread in more than 40 countries.  They all vote the same day in order to elect their representatives. It is a democratic and transparent process.  Tibetans have to pay a voluntary “freedom tax” in order to participate in the elections. Without it they cannot vote.  Not withstanding in the last 10 years the universe of voters has doubled.

G L: What is the role and vision of the elected members of the Tibetan people?

L S: Our main political objective is to alleviate the suffering and difficulties that the Tibetan people are currently going through in Tibet.  We are simultaneously working to find a solution for the problem of Tibet by means of what we call the “middle way approach”, that is accepting our inclusion within the People’s Republic of China but at the same time seeking for genuine autonomy.

G L: Why is Tibet important on the global context?

L S: Tibet is proof for world leaders and humanity that conflicts can be solved  non violently and by means of dialogue.

If the world community seeks to approach its many problems in this way, the Tibetan conflict must be resolved accordingly.

G L: What interest does the Sikyong have in Mexico?

L S: This is my first trip to Latin America beginning Edith Mexico.  I am here to make a call on the consciousness of your leaders and society in generals about the tragedy of Tibet. Mexicans can and must learn the lessons offered to us by history. What happened to us can also happen to you!

G L: What will happen in the future to the figure of the Dalai Lama?

L S: The dynasty of the Dalai Lama’s began in 1642, its a tradition that has existed for more than 500 years. The Tibetan people would of course love to have a successor to the present Dalai Lama, it’s XV incarnation. The most important issue here is the Tibetan cultural belief on the spiritual identity of mind and its eternal continuity, what we call rebirth.  That is to say that we come back to the world to finish what we started on previous lives. To continue with a vision.