Given Genuine Autonomy, We are Committed to Remain within PRC: His Holiness the Dalai Lama to Al Jazeera 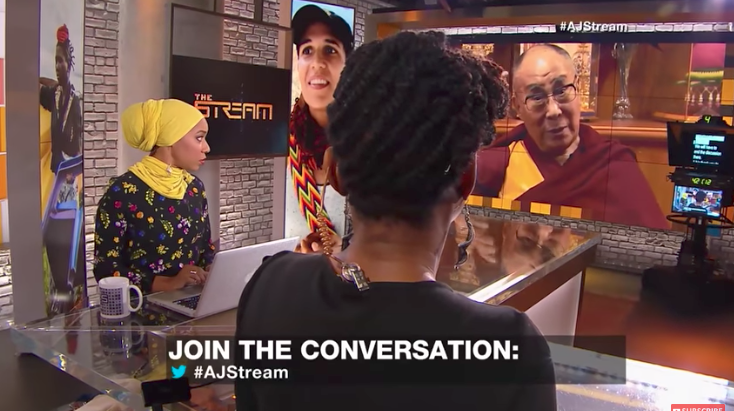 His Holiness the Dalai Lama on The Stream, Al Jazeera English.

Dharamshala: Tibetan spiritual leader, His Holiness the Dalai Lama on Tuesday, joined in conversation with The Stream, a daily TV show on Al Jazeera English during his second day dialogue with youth leaders of the United Nation’s Institute of Peace, USIP.

In the Live interview, His Holiness The Dalai Lama declared Tibet was “not seeking separation” from China, but was instead “very much committed to remain within People’s Republic of China, provided they give us certain rights, mentioned in the Chinese constitution” and those be “fully implemented on spot.” He also reiterated his respect for the Chinese people, whom he described as “cultural, historical and determined people.” Watch the full interview here.

Below is the full transcript of the interview.

The Stream: As a youngster what was the most valuable lesson you learned about building peace?

His Holiness the Dalai Lama: I was very very lazy student. Now gradually I realised these things, which I study really, have immense help to keep my mind fresh, sharp because we study how to analyze things. At the beginning we should keep more skepticism not just believing and then analyse.

The Stream: What do you make of what the US and young leaders here can learn from those who are with you there and from your background

His Holiness the Dalai Lama: Sometimes leaders, they consider that they lead at different level of world. I think, the real representatives of human beings are the innocent people, and particularly those people who come from difficult area, they believe peace and harmony is really important. Therefore I hope leaders, including spiritual leaders, I think, worthwhile for them to listen more from these young people whose life really passing through difficult experience. That is my feeling. So these young people passing through immense difficulty, including danger of own life but still keep hope, optimism, determination; that’s really wonderful. So there is real opportunity if we keep that self-confidence and willpower with human intelligence and warmheartedness; we can change our world into a better and more compassionate world. That is my conviction. Therefore inspite of being an old person, I am determined to serve these young people, they are the future of humanity, future of the world.

The Stream: When I watch you sit and talk with people, you always reach out and touch them. Back in 2015, it is with Archbishop Desmond Tutu, you are talking about joy and again your arm is reaching out and touch. Why is that so important to what you do and how you connect with people?

His Holiness the Dalai Lama: Firstly, the best way to communicate or showing your real feeling is smile. In order to do that, I don’t like formality. After all when we are born, no formality; when we die, no formality. Formality is artificial. It actually becomes some additional barrier so we should talk, human being to human being. Then automatically come closeness feeling and with that laughter, teasing and then touching. So when particularly my hand becomes quite cold, I get some benefit. It’s good to touch peoples face and I can see their softness.

The Stream: Many years later China still views Dalai Lama as foe, how do you intend to change that?

His Holiness the Dalai Lama: For me personally that is nothing serious. When sometime back, some Chinese officials describe me as demon. So on one occasion, a reporter asked me, what is my reaction. I replied ‘yes I am demon, with horns.’ Then sometimes I jokingly say that my horns seem to be growing longer and longer.

We respect Chinese people, historical and cultured, hardworking people. Now today, as matter of fact, it is the most populated nation and over 2000 years, China and Tibet had very close relationship through marriage. We are not seeing independence, separation, (from China) inspite of past history, we always look at today’s reality and I am one of the person who really admire spirit of European Union so China, we are very much committed to remain within People’s Republic of China, provided they should give us certain right, mentioned in Chinese constitution, should be implemented fully on spot. So we usually call the Middle Way Approach, not seeking separation but not satisfied with existing policy or situation.

The Stream: I wanted to share with you one of the most asked question, what does the Dalai Lama has to say about the Rohingya? What is your take on the situation in Myanmar?

His Holiness the Dalai Lama: Very very sad. When I first heard about what was going on in Burma, I expressed that all the people, including Burmese army they should visualise Buddha’s face, I am hundred per cent sure he will help to those suffering irrespective of their belief and religion. At that time, Times Magazine on cover, one Buddhist described as Buddhist terrorist. I think it’s totally wrong. Also, now these years, I have been publicly telling that the wording Muslim terrorist is wrong. My Muslim friends told me, if a person who claims oneself as follower of Islam create bloodshed is no longer genuine practitioner of Islam. Therefore wording Muslim and Buddhist terrorist is totally wrong. As soon as one committs some violence or terrorism, one is no longer Muslim or Buddhist. Too much generalisation, not precise. During my visit to European Union, I told that these wordings are totally wrong.

The Stream: Your Holiness, you met Aung Sun Sukyi, who is a fellow Nobel Laureate in 2013 in Praque, Czech Republic. You look very close here. What would you advise her about bring peace wit her Rohingya community in Myamar. How would you use your skills.

His Holiness the Dalai Lama: At that meeting, I mentioned to her, as a Nobel laureate sister, should do something. She told me very complicated situation. So I think world organization, including United Nations now speaking on behalf of these suffering people, is very encouraging and many human rights organizations. I really admire and appreciate many organisations really helping people who are facing starvation. Wonderful! When I saw these things, I really feel in this complicated world, still compassion carry some work. The. These I consider seeds, one seed with proper care can grow. So no one else we can blame for the human created problems. All problems we created, so logically we human beings have the ability to reduce or eliminate these problems, which essentially created by human beings. Logically we have moral responsibility to reduce these manmade problems.