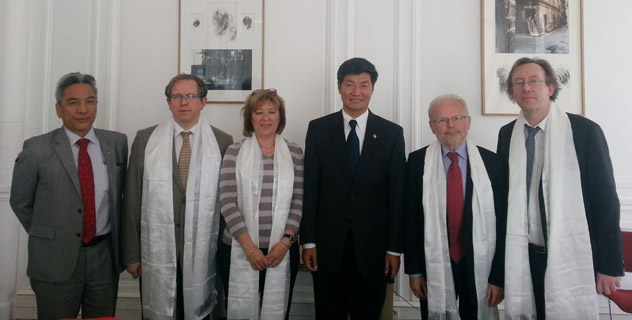 PARIS: Expressing deep concern over the human rights situation in Tibet, a group of French MPs urged President Francois Hollande to raise the issue of Tibet during his meetings with the visiting Chinese president.

“Do not sacrifice the issue of Tibet and human rights for corporate affairs. The development of trade relations with China should in no way be at the expense of human rights,” said Jean- Patrick Gille, Noel Mamère, members and co-presidents of the study group on the issue of Tibet in the French National Assembly, in a press release on the eve of President Xi Jinping’s first visit to France. Mr Xi arrived in Lyon yesterday as part of his four-nation tour of Europe.

“We wish the question of respect for human rights by the Chinese authorities in Tibet to be discussed in the meeting. According to a recent survey commissioned by an NGO, 78% of French want the French president “expresses” with Mr. Xi Jinping “concern about the situation of Tibetans,” the French MPs said.

The French MPs expressed deep concern over tragic self-immolation of Tibetans in protest against the Chinese government’s repressive policies. “The Tibetan population has made the choice of nonviolent resistance and sacrifices are sadly the most visible part of this daily struggle,” they said.

“Like the President of the United States, Barack Obama did a few weeks ago, we express the view that the President of the French Republic, the cradle of Human Rights, should officially receive the Dalai Lama as an internationally respected religious and cultural leader,” they said.

Earlier on 17 December 2013, a motion on Tibet, co-signed by the all-party members of the Study Group on the issue of Tibet in French National Assembly, was tabled. It called for resumption of dialogue between representatives of the Chinese Government and the Tibetan representatives to promote autonomy for Tibet within the People’s Republic of China.

The motion reaffirmed the right of Tibetans to freedom of conscience, in accordance with Article 18 of the Universal Declaration of Human Rights and Article 36 of the Constitution of the People’s Republic of China and condemns the policies threatening language, culture, religion, heritage and environment of Tibet implemented by the Chinese authorities in violation of those provisions.

It reiterated its support for the middle-way advocated by the Dalai Lama, whose purpose, clearly stated in the Memorandum of 2010, is to establish not independence, but a genuine autonomy for Tibet within People’s Republic of China.

It called on France and the European Union to call for the resumption of dialogue between the Chinese authorities and envoys of the Dalai Lama and to appoint a European Special Coordinator for Tibetan Affairs.