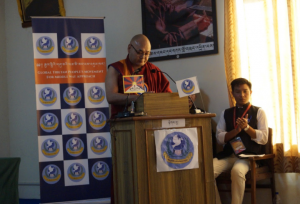 Speaker of the 16th Tibetan Parliament-in-exile, Ven. Khenpo Sonam Tenphel attended the inauguration as the ‘Chief-Guest’.

The program began with a short-clip of His Holiness the Dalai Lama elucidating on Middle Way Approach, which was followed by GTPM’s President Lobsang Choephel briefing the attendees on the significance of comprehending the evolution of Middle Way Approach and its significance in relation to international and Tibet-China context. He stated that Middle Way Approach, is an integral part of Tibet’s culture of compassion and non-violence and that it is the best way to resolve the issue of Tibet with China.

Speaker Ven. Khenpo Sonam Tenphel took the stage to elaborate in detail the evolution of Middle Way Approach, delineating from the time of His Holiness the Dalai Lama along with 80,000 Tibetans’ exodus to exile in India in 1959 to the envision of a win-win proposition by His Holiness the Dalai Lama after a series of discussions with the Kashag, leaders of the Tibetan Parliament-in-Exile, and trusted friends of Tibet in 1974; to the subsequent evolution and changes till the present time.

He also briefed on the Middle Way Approach’s political background by stating it as a proposition envisioned by His Holiness the Dalai Lama but adopted democratically with support from both the majority Tibetans and Tibetan Parliament-in-Exile.

He added that His Holiness has proposed a referendum of the Tibetan community be held for future dealings with China and to reorientate the course of the Tibetan freedom struggle, given the changing stances of Chinese government, which subsequently resulted in Tibetan Parliament in exile adopting the unanimous resolution that stated that His Holiness should, in the future, be the sole person to take decisions on Sino-Tibetan issues.

It also stated that the decisions taken by His Holiness the Dalai Lama will be regarded by all the Tibetan people as being the equivalent to a decision reached through a referendum.

“One must understand the reason as to why we are adopting this approach in today’s context. There are several reasons but let’s just state two. One – For any country to adopt a policy, be it as small as an economic policy, the country has to depend on the policies of other countries. Let’s take a look at the European Union, which is a group of 28 countries that operate as a cohesive economic and political block. The member states sacrifices to ensure the great good of the whole union. Look at how member states use Euro as their official currency letting go of their own.

“For Tibet to depend on China, whether through Middle Way Approach or independence, is imminent for an individual at the least or a nation by large; a one cannot survive on its own without depending on others. That’s why MWA is appropriate and competent, on which all can examine as well. Secondly, in today’s world, there are many countries that enjoy autonomy such as England, Canada, Italy etc. They are able to preserve the culture, tradition and language of their own people.

“Given the Chinese government policies and the urgent situation inside Tibet, MWA, if considered, is an approach that would enable us to resolve the issues of Tibet. Therefore, it is a viable approach to be adopted. One can also go through the official documents on Middle Way Approach, from Strasbourg Proposal in the European Parliament in 1988 and Memorandum on Genuine Autonomy for the Tibetan People presented during the 8th round of talks in October-November in 2008. You can read on them and examine,” Speaker said.

He continued, “As often iterated by His Holiness the Dalai Lama, one must never cease to examine the competency and significance of Middle Way Approach, in context to the international geopolitics, China and Tibet. MWA can be considered an ideology of high competence in today’s world, for its a policy that promotes the spirit of reconciliation, non-violence and humanity.

He concluded by requesting the young thinkers to pay more attention to the Middle Way Approach, to examine and research on it, so that they can contribute more in bridging the gap closer to the resolution of Tibet issue