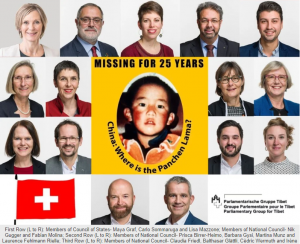 The 15 Parliamentarians raised concerns over China’s continued denial of information about the Panchen Lama and China’s refusal for an independent team to assess the ground situation in Tibet. Calling upon the Chinese government to “respect human rights in Tibet including cultural and religious freedom” the Parliamentarians pressed the Chinese government to “resume dialogue with the representatives of His Holiness the Dalai Lama for peaceful resolution of Tibet.” The Parliamentarians expressed deep respect for the Tibetan culture and the peaceful resistance of Tibetan people and undertook to “stand in solidarity with the Tibetan people.”

The case of the enforced disappearance of Panchen Lama Gedhun Choekyi Nyima is pending at the United Nations, both at UN Working Group on Enforced or Involuntary Disappearance and the Committee on the Rights of the Child, for the last 25 years. China has repeatedly denied any access to the Panchen Lama Gedhun Choekyi Nyima and deprived him of any religious and scholastic education in Tibetan Buddhism.

In the last six decades, China has converted Tibet into one of the lease free regions in the world. Under the Chinese Communist Party regime, Tibetans have been kept under constant high-tech surveillance and information blockade. The Tibetan people, particularly the monks and nuns are under scrutiny and pressure and are forcefully subjected to “patriotic re-education camps.” The US Commission on International Religious Freedom in its 2020 report has once again advised the US Government to redesignate China as “‘Country of Particular Concern’ for engaging in systematic, ongoing, and egregious religious freedom violations.”